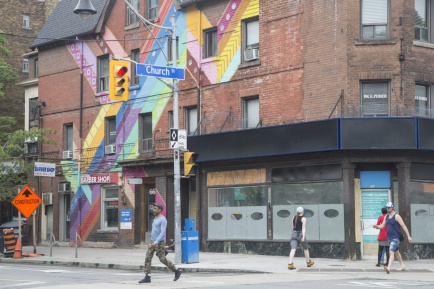 It was the summer of 2012. I had breached my parole conditions. I have a habit of doing that when I drink alcohol and do cocaine. The police were looking for me (real or imagined) but maybe they were looking in the wrong place. I had boarded the bus in northern Ontario and I was now unlawfully at large in the city of Toronto, hiding from the wreckage of my past. You can run from the scene, but you can never hide from yourself. The old adage is true, wherever you go, there you are. There I was, in the Village, a vibrant and diverse, predominantly gay neighbourhood in Toronto’s downtown core.

For all its vibrancy and diversity, sunshine and rainbows, the Village also has a bleak side. I found myself there in the shadows, among the hungry ghosts of The Six. Folks who have lived and were living extremely difficult and complex lives, facing even more hardship on the streets of Church and Wellesley as they struggled against the constant threat of victimisation, poverty and homelessness, issues around sexual identity, mental health disorders, conflicts with the law, and problematic substance use. My addiction sure knows where to hang its hat.

On the streets of the Village, marginalisation and vulnerability are targets for predation. Many folks selling the last marketable commodity that they have left in exchange for a fleeting bit of relief from their pain: the body. The body is never so divested of its inherent worth and value than in the survival sex trade. It is also never more susceptible to the violent impulses of the sadistic and predacious. A Manichaean cosmic duality of good and evil seems to reveal itself when the Love which brought this neighbourhood together is squared up against the Evil which has been perpetrated upon it. Serial murder, brutal homicides, beatings, and an all too common occurrence of folks simply vanishing like the conscience of those responsible for these hideous acts is well documented and the subject of numerous police investigations.

In retrospect, perhaps I was fortunate that night. I wasn’t there to sell my body, nor was I there because I was questioning my sexual identity. My addiction does not have a sexual orientation. I was fully aware that the two men who had invited me up to the apartment colloquially known as a “trap-house” weren’t interested in my charm and personality. They were interested in my boyish good looks. I was intent with their drugs. Both our desires would collide that night. The wreckage of the past would collapse into the present like my body on the bed which I would be made to lie in. So the saying goes, maybe I made my own bed.

In hindsight, If I had been more intuitive, I might have picked up on the fact that their queries regarding how much alcohol I had consumed that night was a red flag. I might also have realised that the shower that they offered to me had nothing to do with their being gracious hosts or that the tall glass of water they kept insisting that I drink had nothing to do with their concern for my hydration. I was too focussed upon their cocaine supply to realise what hit me when the GHB, also known as the date rape drug, began to flood my nervous system and interact with the two tablets of Ecstasy that I had secretly chewed in the bathroom just 20 minutes prior. Like the bad intentions that the night began with the chemicals collided with one another in my body and immediately went to work on my nervous system resulting in an initial wave of euphoria. The euphoria rushed through my body and broke against the shore of my synapses. I had found what I was looking for, release, freedom, something I can only describe as the stillness which exists in that fraction of a second when a wave hits the shore and then ebbs away.

As the sedation took hold I was escorted to the bed and the two men flanked me. One on either side. I was completely conscious and alert to every helpless moment, yet my body no longer belonged to me. It was feeble. I was a ghost in a machine that had been hijacked by these two malevolent figures and the chemical restraints that they had chosen to strap me down to the bed with. It became obvious what their plans were. I asked them why they were doing this. They told me they were bored.

In spite of my indolence I could feel my heart rate accelerating as the mélange of GHB and Ecstasy became a ruinous cocktail which my nervous system was no match for. Each short breath that my body would allow tasted thick and dense against my throat as I struggled for air. I began to sense that my nervous system would soon give way to something more violent, like the ascent of a rollercoaster before it reaches the apex and plummets. I accepted in that moment that death was a possibility, weighing my demise against the alternative consequences of my decision’s that night. There was a certain peace which I made with departure.

The first seizure locked my body with the ferocity and violence that I had anticipated. My awareness of death has never been more attuned than in that space between violent convulsions and secondary spasms which reprieved my body only so much that I could find my breath; lost as it was in the maelstrom of those moments, cradled by those vile men.

Wherever you go, there you are.

Rebellious kid looking for a place to scribble down his notes from the underground. View all posts by Leslie Law

2 thoughts on “I’m sorry. Please forgive me. Thank you. I love you.”